To distract myself from the empty house yesterday afternoon I slid a DVD of the James Bond vehicle Diamonds are Forever into the player. A treat of sexy lingerie immediately presented itself—Jill St John in sheer bikini panties did the trick. Before long the colorful bikinis and sheer fabrics started me wondering, “what is hidden around the internet to preserve lingerie fashion from 1971?”


"Kloss used vivid colors like lemon yellows, greens, amethyst, and ruby in abstract shapes reminiscent of abstract expressionist paintings. Sophisticated, simple, clean designs were detailed with top stitching, tiny rows of buttons, simple edge trims, or tie closures. These nonstructured designs were adapted for lingerie and loungewear marketed by Lily of France and CIRA. Included were designs for nightgowns and bras, both seamless and underwired, again without superfluous lace trimmings. The most revolutionary of Kloss' designs came about as a reaction to the "ban the bra" movement in the 1970s. He designed a bra that appeared not to exist in 1974 for Lily of France, called the "glossie," which was made from stretchy, sheer, glittery material. The design was seamless, unconstructed, but underwired, so it provided support for those women who needed it, yet wanted the braless look. The "glossie" came in solid colors such as amethyst, indigo, ruby, and mocha. Kloss received two Coty awards, one in 1971 and another in 1974, for his lingerie designs." 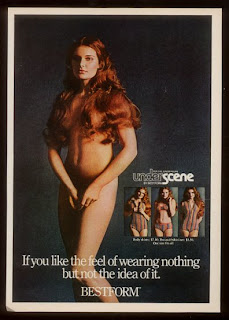 This original 1971 print ad for Bestform plays with the "no-bra" theme. It measures approximately 11" x 8" overall.

gallery of patterns Joh Kloss created for Butterick in the 1970s and 80s. A gallery of John Kloss creations presented by Posh Vintage. “The stunning growth of Natori's empire is due to her vision. In the 1980s, she realized her lingerie was increasingly exposed by the women who purchased it, so she created publicly wearable garments inspired by her lingerie. The resulting neologist crossover category "innerwear-as-outerwear" was never her corporate slogan, though it might serve.” (cite) 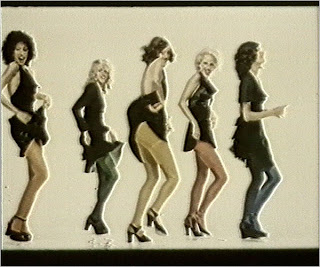 film still from an ad for Dim lingerie directed by William Klein in 1971. Photo: Agence Publicis, 1971.
Advertising from a more modern era: Here is an article found while mashing up this post. It is about historical reactions to sexy bra advertising campaigns in the UK.
Reprinted historical article: Lingerie And The History Of Underwear (Originally published November 1933 )
Posted by Robert m Cox at 10:36 AM